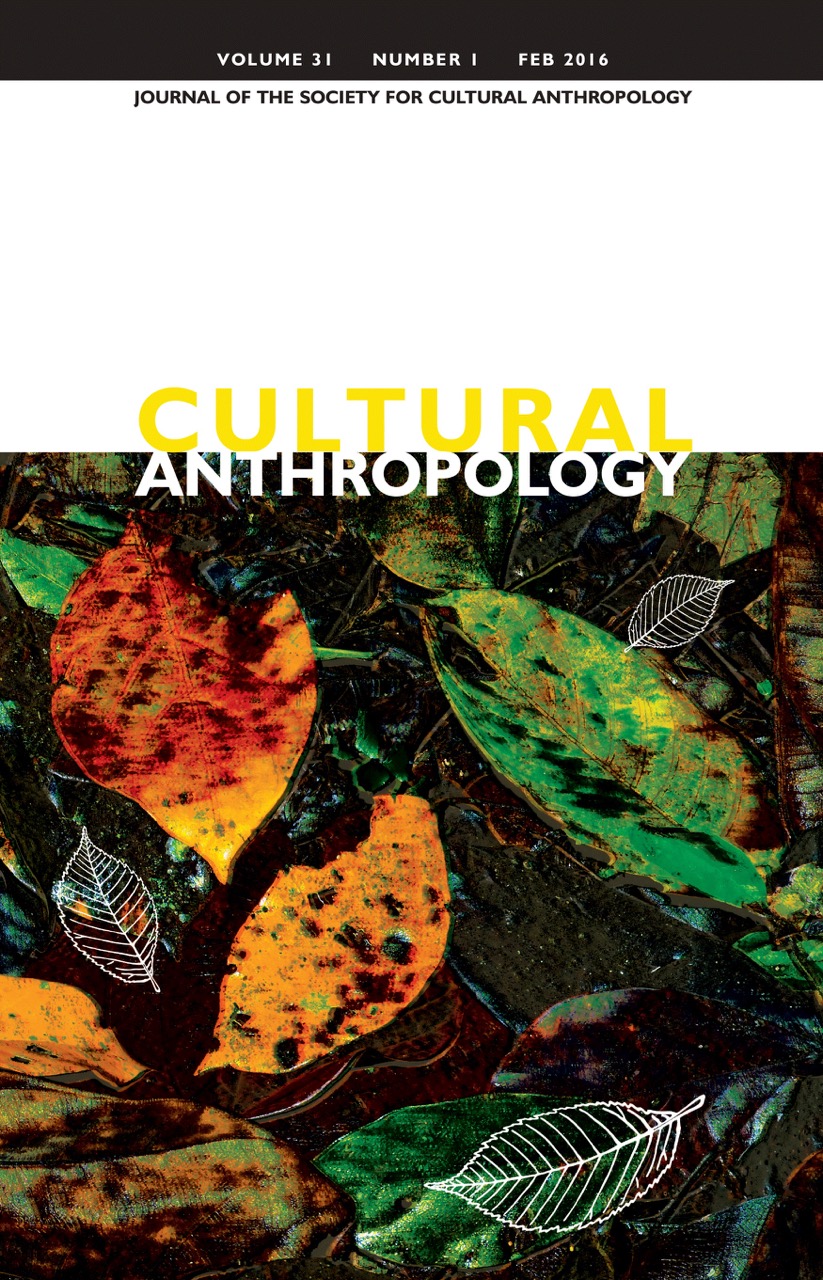 Our February 2016 issue opens with an editorial by managing editor Marcel LaFlamme, which explains the origins of Open Researcher and Contributor IDs (ORCIDs) and why Cultural Anthropology is now requiring authors to use them.

Six original research articles complete the issue. Sarah Besky explores recent efforts to convert tea trading in India to digital financial systems, efforts that have been fiercely resisted by outcry brokers opposed to the rationalization of their communicative infrastructure. Kabir Tambar analyzes the dilemmas of Turkish liberalism in the wake of state repression of the Gezi Park protests, illuminating how the long history of minority repression in Turkey seems increasingly to foreshadow the violent destabilization of the body politic. Kristina Lyons traces the contrasting logics of living and dying in the tropical forests of Colombia’s Putumayo—an environment heavily pressured by the aerial fumigation of the Drug War—and argues for ecological imaginaries that do not depend on notions of productivity or growth. Noelle Stout traverses the anonymous online publics of indebtedness that emerged in the aftermath of the 2008 U.S. mortgage crash and how they gestated new affective and moral orientations toward debt and default. Daena Funahashi challenges the political neutrality and ontological singularity of global health policy, revealing how Thailand’s military junta adapted the World Health Organization’s Health in All Policies initiative into a monarchical and Buddhist framework for righteous rule. Finally, Emilia Sanabria investigates the production of a language of uncertainty in nutritional science and public health responses to obesity. She contends that the core problem is not the absence of knowledge per se, but rather that dominant scientific and policy paradigms refuse to endorse politically complicated causal certainties in favor of individual culpabilities.

On the Problem of the Namesake

The Future of Price: Communicative Infrastructures and the Financialization of Indian Tea

Brotherhood in Dispossession: State Violence and the Ethics of Expectation in Turkey

Decomposition as Life Politics: Soils, Selva, and Small Farmers under the Gun of the U.S.–Colombia War on Drugs

Rule by Good People: Health Governance and the Violence of Moral Authority in Thailand

Circulating Ignorance: Complexity and Agnogenesis in the Obesity “Epidemic”