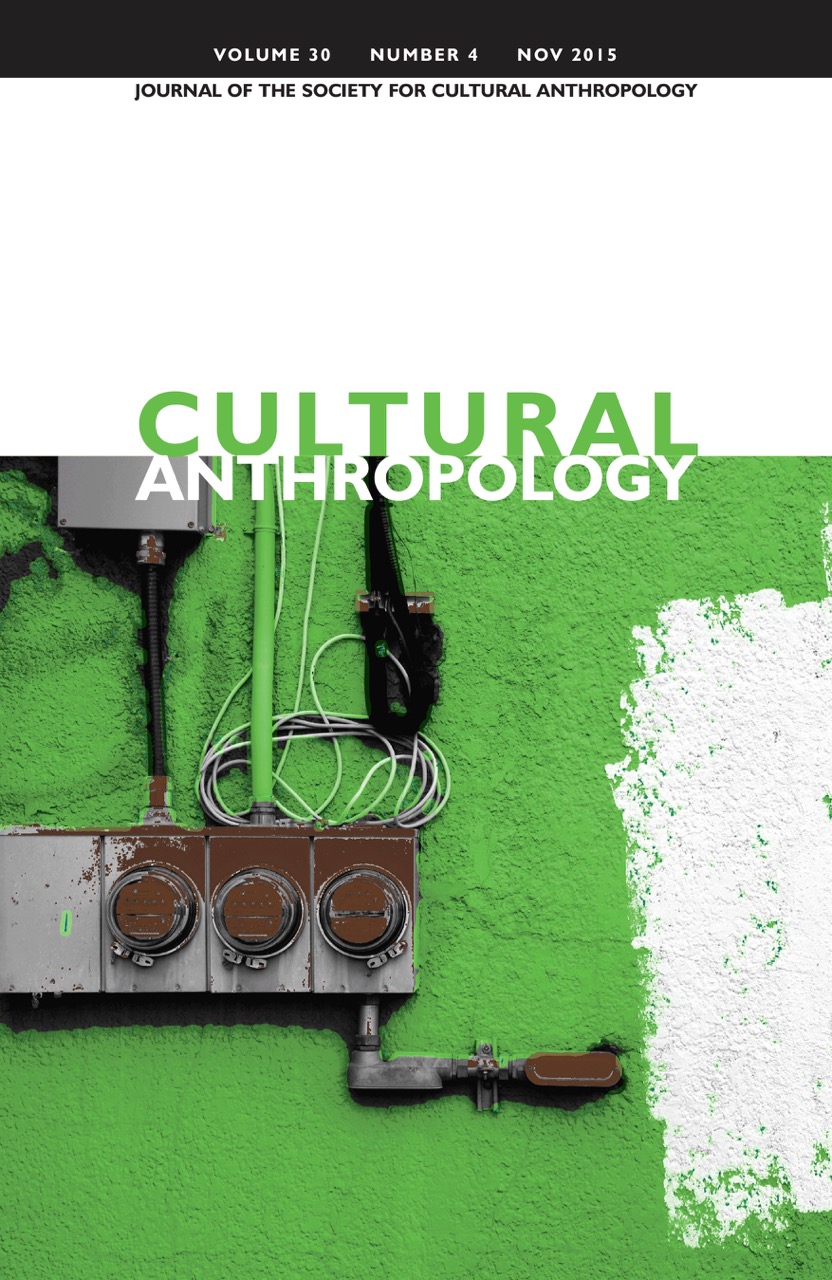 Our November 2015 issue opens with the final installment of our yearlong series of reflections on the first thirty years of Cultural Anthropology. Anne Allison and Charlie Piot, who edited the journal from 2010 to 2014, review their experience of editing in a time of rapid social transformation and global precarity. They also explain the backstory of their innovative work on new series like Hot Spots and Theorizing the Contemporary, as well as their leadership of the journal’s open-access transition.

Featured in this issue is our second Openings collection, “Anthropology Electric,” part of Cultural Anthropology’s new Openings and Retrospectives section. Dominic Boyer introduces the collection, which developed from a panel at the 2013 annual meeting of the American Anthropological Association, and discusses electricity’s past and potential influence on theory in anthropology and the human sciences. Mike Anusas and Tim Ingold issue a call to think more expansively about electricity as phenomenon of matter and life, beyond its co-optation by corporate industry and neoliberal statecraft. Akhil Gupta turns his attention to the global South—where the fastest growth in electrical demand is coming from expanding middle classes—and discusses whether the developmental trajectories of electricity in the South can avert the eco-suicidal path of the global North. Tanja Winther and Hal White argue for bringing the material-social entanglements of electricity more fully into discussions of modernity, describing in particular how the arrival of electric light creates new conditions of possibility for power and mobility. Finally, Canay Özden-Schilling examines several cultures of expertise surrounding electricity, revealing how the material and infrastructural qualities of electricity alter conventional understandings of commodities, economics, and markets.

Our November issue also includes four new research articles. Jonathan Echeverri Zuluaga documents the temporal and spatial dislocations of African migrants who find themselves suspended in Dakar, Senegal, where the malleability of final destinations and the uncertainties of following a path of errance refigure senses of purpose in a world of elsewheres. First oil serves as a key heuristic in Gisa Weszkalnys’s analysis of how potentiality, speculative knowledge, and obscured evidence shape the petrogeological imagination in São Tomé and Príncipe, where interruptions, pools of indeterminacy, and incongruous instruments all contribute to speculative futures. Alex Blanchette demonstrates how biosecurity protocols and corporate modes of governance condition what it means to be human among those who labor in the production and maintenance of porcine life. Finally, Matthew Wolf-Meyer revisits Gilles Deleuze and Félix Guattari’s minor sciences, as well as Sigmund Freud’s mourning and melancholia, to query how Lacanian psychoanalysts conceive of their ethical commitments and practices within dominant regimes of psychiatry and neuroscience.

The Charge against Electricity

An Anthropology of Electricity from the Global South

Errance and Elsewheres among Africans Waiting to Restart Their Journeys in Dakar, Senegal

Geology, Potentiality, Speculation: On the Indeterminacy of First Oil

Our Master’s Voice, the Practice of Melancholy, and Minor Sciences