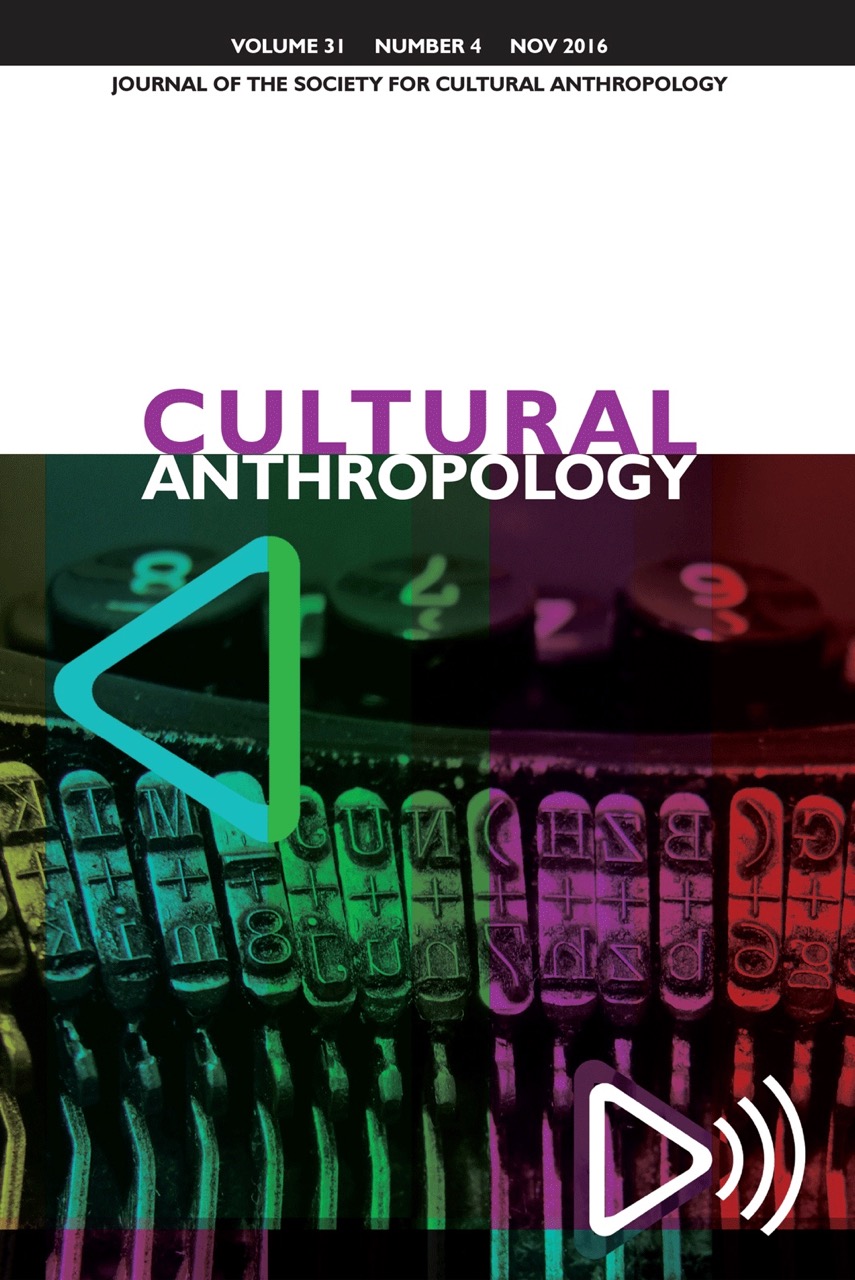 In our final issue of 2016, Cultural Anthropology launches its long-anticipated Sound + Vision section. Stefan Helmreich introduces us to gravitational-wave science and the sonic ways of knowing it figures. Eli Thorkelson analyzes an instance of French protest politics—the Ronde march against neoliberal university reform—and how it sought temporal repair as a means to achieve a different future. Yen-Ling Tsai, Isabelle Carbonell, Joelle Chevrier, and Anna Tsing invite us to experience the Golden Snail Opera, a sensory encounter with multiple species on Taiwan’s Lanyang Plain, which proposes an experimental natural history through a heterogeneously mediated polylogue. All three articles incorporate multimedia features (including audio, video, and animated figures) in order to help probe the potentialities of digital publishing and offer prototypes for the future of the anthropological research article.

Two other research articles round out our November issue. From the perspective of a conflict with the state over Innu caribou hunting, Mario Blaser asks whether it is possible to consider a cosmopolitics that does not resolve to the project of a common world. Can such an project really be stabilized across partially connected and stratified worldings? Angela Garcia introduces us to an archive of prison letters written by three generations of New Mexican women, seeking to illuminate the authors’ arts of existence within the carceral system that characterizes law and ethical life in American society.

This issue also features a new installment of our Openings and Retrospectives section, with a Retrospectives collection on “Queer Anthropology,” edited by Martin Manalansan. The collection’s contributors offer a synoptic account of how conversations and priorities in queer anthropology have emerged and transformed—or maybe switched—while always attempting to push the boundaries of anthropological epistemics. In his introduction, Manalansan underscores the affective synergies that have prompted queer anthropology to seek out the aspirational edges of the discipline. Drawing from her foundational and ongoing work in the field of LGBTQ anthropology, Ellen Lewin sets out to queer questions of queer normativity, arguing that when subjects and subjectivities are valued or dismissed based on whether they are outrageous enough, subtle and valuable distinctions of experience can be lost. Scott Morgensen asks how queered work can also be susceptible to reproducing the violence of racism and settler colonialism, calling for yet deeper forms of exposure. Jafari Allen challenges queer anthropology, and indeed all anthropology, to continue to learn from the unsettled possibilities and radical promise found in activist, artistic, and scholarly works by Black/queer and queer of color communities. Queer thinking, Margot Weiss lastly reminds us, is an analytic mode and not an identitarian commitment. Through this distinction Weiss comes to a queer dialectic, marked by both epistemological closure and intellectual potentiality as it seeks out routes and passages to trouble the sedimented logics of sexism and homophobia.

Sound + Vision: Experimenting with the Anthropological Research Article of the Future

Gravity’s Reverb: Listening to Space-Time, or Articulating the Sounds of Gravitational-Wave Detection

The Infinite Rounds of the Stubborn: Reparative Futures at a French Political Protest

Is Another Cosmopolitics Possible?

The Blue Years: An Ethnography of a Prison Archive

One View from a Deterritorialized Realm: How Black/Queer Renarrativizes Anthropological Analysis