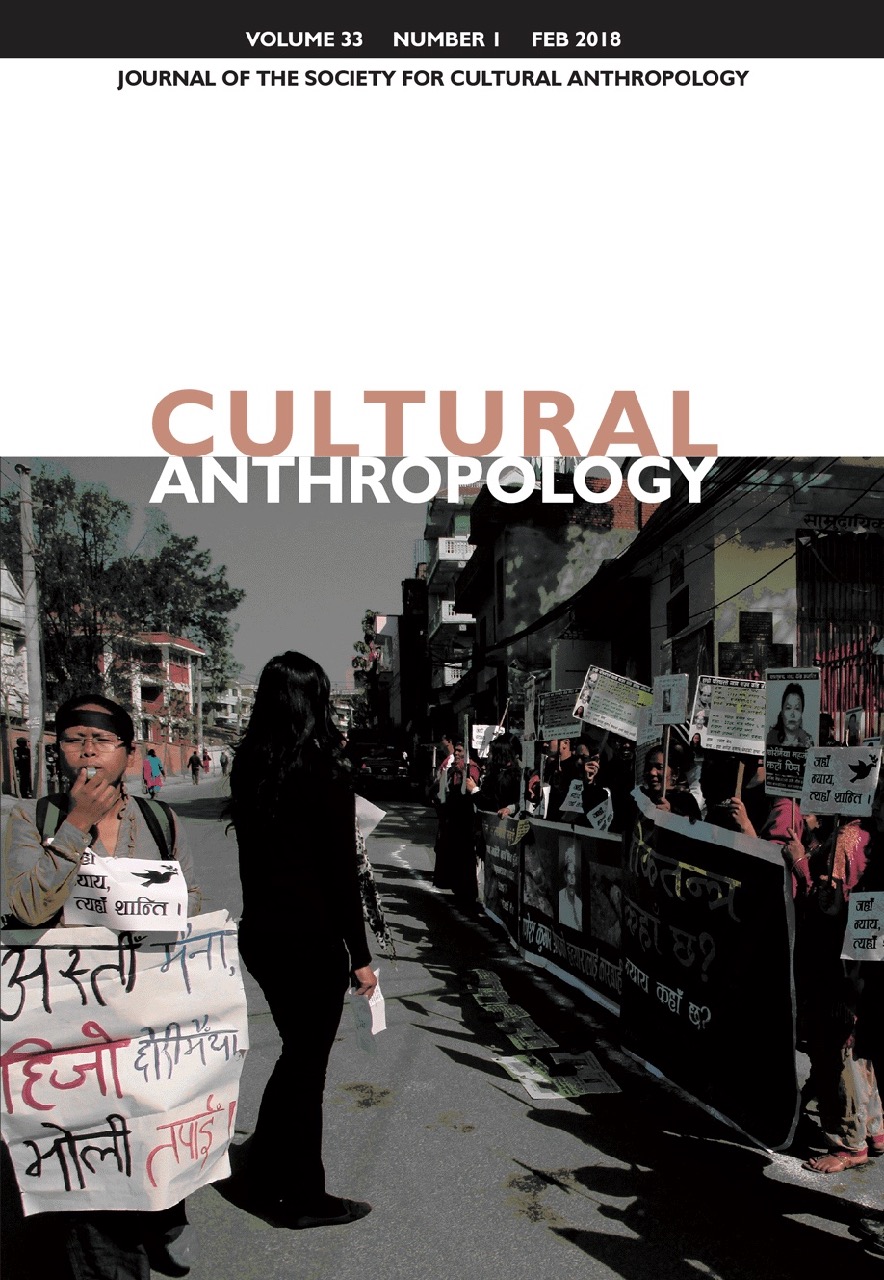 In our first issue of 2018, Cultural Anthropology features two new contributions to our Sound + Vision section with a shared focus on voice and sound. Laura Kunreuther uses the South Asian concept of āwāj to explore the multiplicity of democratic soundscapes in the world today. She argues that motifs of āwāj diverge from polarities of public voice and crowd noise that are rooted in the liberalism of the global North. Meanwhile, Patrick Eisenlohr examines the sonic atmosphere of voice in the context of na‘t, a genre of devotional poetry familiar to Muslims in Mauritius. Eisenlohr argues that his neo-phenomenological approach can help “to overcome the unproductive dualism of discursive signification and unfathomable sonic materiality” that characterizes much of the scholarship on voice.

We are also pleased to feature four original research articles in our February issue. Two essays thematize affective atmospheres. Jessica Cooper highlights the gap between jurisdiction and control in her study of a U.S. mental health court’s operations. Following the physical and psychic movements of one key informant, Cooper reveals how wandering can create an affective excess that eludes the grasp of the court system. Sarah Luna argues that narco-stories in the Mexican city of Reynosa have not only created atmospheres of ambient terror but also new kinds of intimacy and relatedness out of the performativity of rumor. Two further essays thematize the political and temporal dimensions of waste. Gabrielle Hecht argues for viewing the Anthropocene through the place-based lenses of scale, metabolism, and waste. She proposes what she calls interscalar vehicles as a trope for moving between deep time and human time as well as between geological and political space. Finally, Chloe Ahmann explores the temporalities of resistance and refusal that accompanied the effort to construct a massive trash incinerator in south Baltimore. She contends that through a process of moral punctuation, affected groups can “work time” to emphasize their vulnerability.

Affective Atmospheres of Terror on the Mexico–U.S. Border: Rumors of Violence in Reynosa’s Prostitution Zone

Unruly Affects: Attempts at Control and All That Escapes from an American Mental Health Court

Interscalar Vehicles for an African Anthropocene: On Waste, Temporality, and Violence

“It’s exhausting to create an event out of nothing”: Slow Violence and the Manipulation of Time