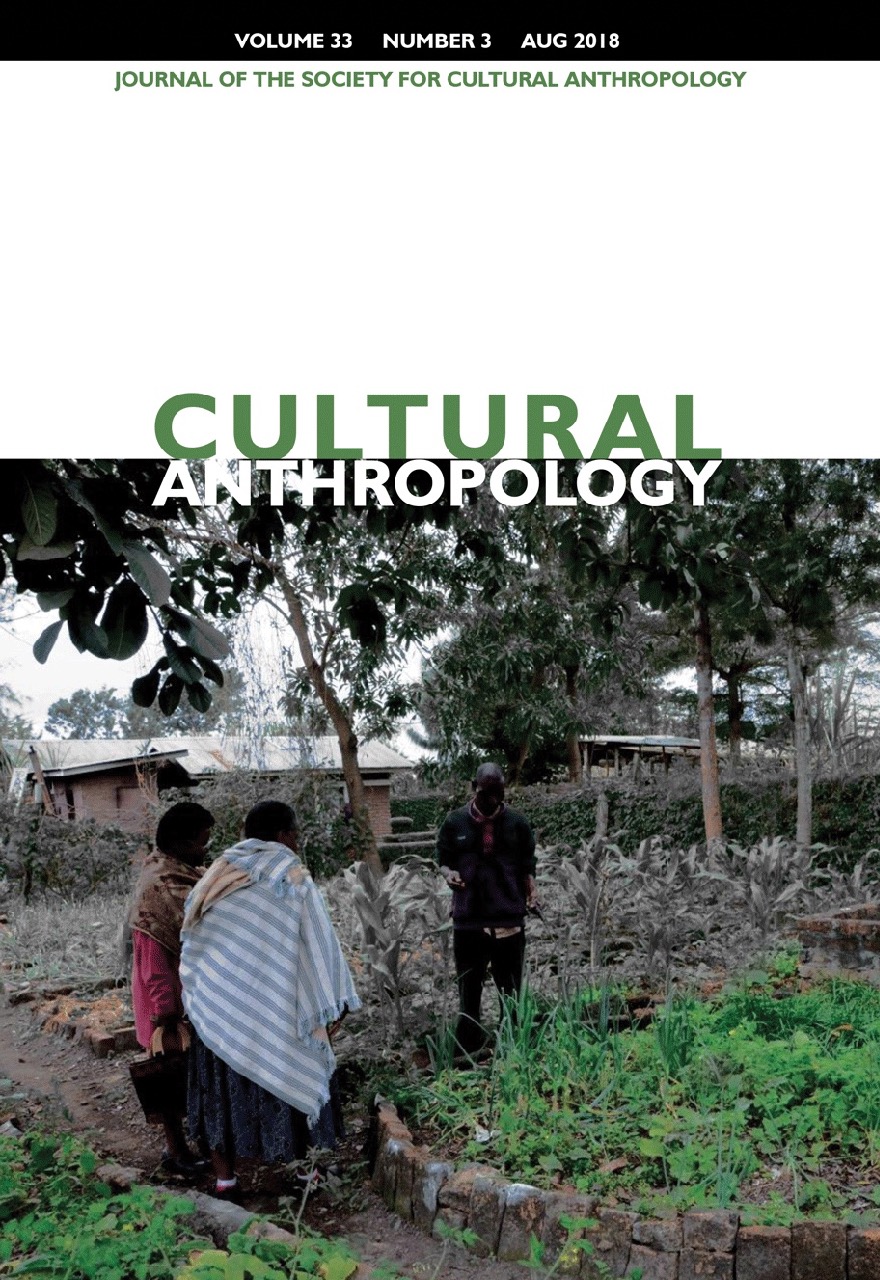 The August 2018 issue of Cultural Anthropology features a new Openings and Retrospectives collection, “Algorithms and Automation,” which explores the widespread impact of mathematical procedures and their supporting sociotechnical infrastructures in the world today. Collection editor Ian Lowrie argues that algorithmic automation “represents a genuinely novel break with previous forms of automation primarily because of its ability to bring together and operate upon a huge range of digital and analog processes at once.” While anthropology has clearly been challenged both theoretically and ethnographically by the apparently posthuman phenomenon of automation, the contributors to the collection—Hamid Ekbia and Bonnie Nardi, Dawn Nafus, and Nick Seaver—offer us several fruitful routes forward.

We are also pleased to publish five original research articles as part of our August issue. In “Landscapes and Throughscapes in Forest Worlds,” Andrew S. Mathews traces the remains of industrialization, plant disease, and forest fires in Italian forests. Mathews argues that attention to landscapes and phenomenologies of forest encounter undermine the idea of a singular Anthropocene in favor of multiple coexistent Anthropocenes, each with their own history. Stacey Ann Langwick explores the complex entanglement of bodies and toxicities in her essay on Tanzanian medicinal gardens, “A Politics of Habitability.” Langwick shows that plants used in dawa lishe (nutritious medicine) “become therapeutic as they move and work with people to create habitable spaces.” Perry Sherouse introduces us to the “dismal frictions” of the expanding car system in Tbilisi, Georgia in “Where the Sidewalk Ends.” His essay focuses on various modes of moral policing that have accompanied increased automobility and its opening of public space to invasion by “a swarm of mobile metal private spheres.” In “Shock Humor,” Michael Degani offers an analytic of zaniness to better understand the structural paradoxes faced by poor urban entrepreneurs in Dar es Salaam, who face a condition of permanent improvisation that is in many respects indistinguishable from constraint. Finally, in “On the Importance of Wolves,” Kevin O’Neill asks what happens to pastoralism when it is focused on wolves and the limits of the human, rather than the protection of the fold. To find answers, O’Neill offers a unflinching look at Pentecostal drug rehabilitation centers in Guatemala City that both depend financially on and offer chemical and affective care to mentally ill lobos, who are believed to be consumed by animal desire.

Algorithms and Automation: An Introduction

Exploration or Algorithm? The Undone Science Before the Algorithms

What Should an Anthropology of Algorithms Do?

Landscapes and Throughscapes in Italian Forest Worlds: Thinking Dramatically about the Anthropocene

A Politics of Habitability: Plants, Healing, and Sovereignty in a Toxic World

Where the Sidewalk Ends: Automobility and Shame in Tbilisi, Georgia

Shock Humor: Zaniness and the Freedom of Permanent Improvisation in Urban Tanzania

On the Importance of Wolves