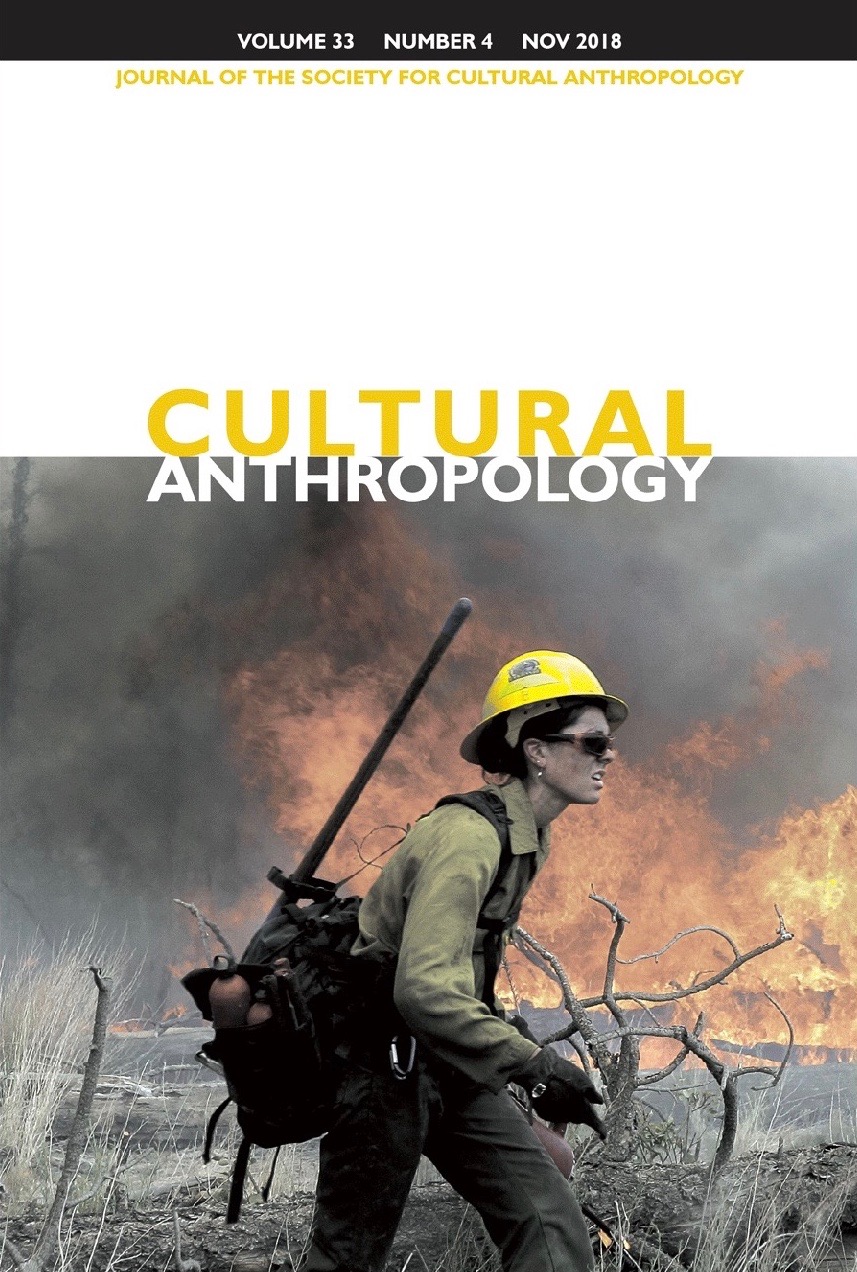 The November 2018 issue of Cultural Anthropology is the final issue to be edited by the collective of Dominic Boyer, James Faubion, and Cymene Howe. Accordingly, the issue opens with two editorial reflections—an editors’ farewell and a practical guide to launching new open-access publishing projects, coauthored by Boyer and managing editor Marcel LaFlamme.

The fall of 2018 marks the tenth anniversary of the 2008 global economic crisis. To reckon with its significance, the editorial team invited Keith Hart, Daromir Rudnyckyj, and Caitlin Zaloom to contribute short essays to our Openings and Retrospectives section, which comment on whether or not 2008 marked a decisive turning point for the neoliberal world order.

We are also pleased to offer five original research articles. In “Wildfires at the Edges of Science,” Adriana Petryna investigates how abrupt environmental change degrades expert knowledge and calls forth new projects of horizoning. Focusing on wildfire proliferation, Petryna explores the “all-too-real human struggle to maintain responsive capacity relative to an absent object.” Alyssa Miller engages a different kind of absence in her essay, “Kin-work in a Time of Jihad,” which traces how families of jihadi militia recruits pressure the Tunisian state to help repatriate their sons. Miller argues that affective kin-work both resists a dehumanizing discourse of terrorism and offers an intimate “aptitude for receptivity within a potentially shameful and world-destroying situation of loss.” Multispecies care surfaces in Sophie Chao’s “In the Shadow of the Palm,” which explores how Marind people of West Papua took the arrival of the oil palm (sawit) as a threat to the ecology of selves in their forest. Chao argues for greater anthropological attention to what she calls “unloving others,” both human and nonhuman. Another other that has prompted human reckoning is the salamander at the center of Emily Wanderer’s essay, “The Axolotl in Global Circuits of Knowledge Production.” A sentinel species of environmental degradation in Mexico City, the axolotl gets interpreted differently in lab and natural environments, a divergence that enables distinct imaginings of both human and salamander futures. Futurity is also a central theme in our final essay, Theodoros Kyriakides’s “Directing the Future of Gene Therapy in Cyprus.” Kyriakides argues that thalassemia patients in Cyprus work to bridge their present situation with an aspirational future of treatment breakthrough through the exercise of what he terms subjunctivity.

The cover image for this issue appears courtesy of Kristen Honig.

Toward Adversary Anthropologies, or, How to Build Your Own Revolutionary Infrastructure

After 2008: Market Fundamentalism at the Crossroads

A Right to the Future: Student Debt and the Politics of Crisis

Wildfires at the Edges of Science: Horizoning Work amid Runaway Change

Kin-Work in a Time of Jihad: Sustaining Bonds of Filiation and Care for Tunisian Foreign Combatants

In the Shadow of the Palm: Dispersed Ontologies among Marind, West Papua

Directing the Future of Gene Therapy in Cyprus: Breakthroughs, Subjunctivities, and the Pragmatics of Narrative