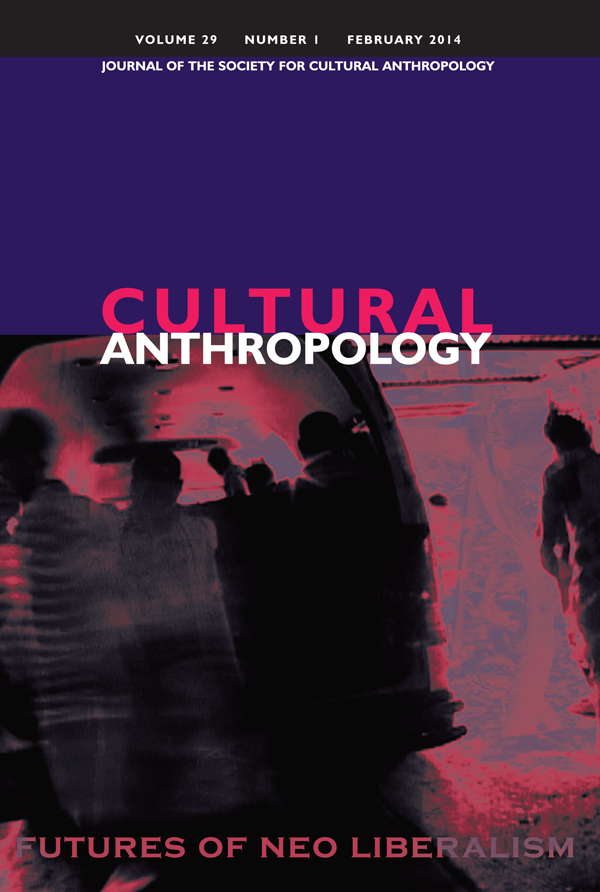 With our February 2014 issue, Cultural Anthropology goes fully open access. This means that the journal is now freely available to anyone anywhere who has access to the Internet (rather than just those who can afford the fees that allow them to get behind the paywall of a commercial press), thereby returning publishing to the commons, where academic life begins. We wish to thank all those who have expended so much time and labor in making the transition possible—former CA editors Kim and Mike Fortun, our talented and indefatigable former and present managing editors Ali Kenner and Tim Elfenbein, web consultant Ryan Schenk, former Society for Cultural Anthropology presidents Danilyn Rutherford and Brad Weiss, Oona Schmid at the American Anthropological Association, members of the OA advisory committee Jessica Cattelino, Chris Kelty, and Jason Jackson, and Paolo Mangiafico and Kevin Smith at the Duke University Libraries.

Open access offers new opportunities for dialogue, scholarship, and communication, and new possibilities for accessing, and being accessible to, the world. We invite you to join us in this exciting new stage of publication, and to share—with friends and colleagues around the world—the news that Cultural Anthropology is now openly accessible to all.

It is fitting that this first OA issue falls when we are publishing the final special issue of a four-year series on the “Futures of Neoliberalism.” Among other things, the open access movement has seen itself as a protest against the neoliberalization of the university, as an attempt to push back against the privatization and corporatization of the intellectual commons. The May issue of Cultural Anthropology will feature a series of articles about open-access anthropology.

Opening Access: Publics, Publication, and a Path to Inclusion

Cast Aside: Boredom, Downward Mobility, and Homelessness in Post-Communist Bucharest

Some Carry On, Some Stay in Bed: (In)convenient Affects and Agency in Neoliberal Nicaragua

"Xenophobia" in South Africa: Order, Chaos, and the Moral Economy of Witchcraft

Homeownership in Israel: The Social Costs of Middle-Class Debt

Ecologies of Investment: Crisis Histories and Brick Futures in Argentina