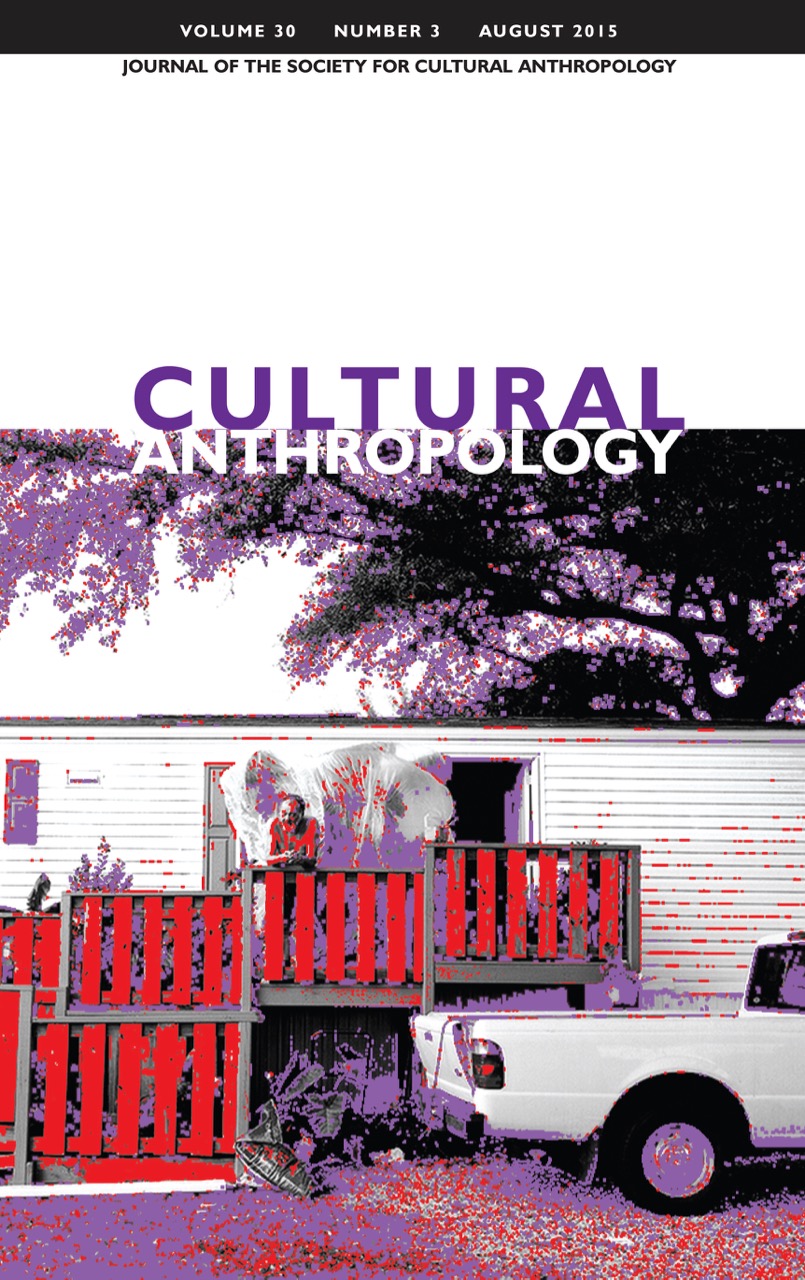 Our August 2015 issue opens with the latest installment of a yearlong series of editorial reflections on the first thirty years of Cultural Anthropology. Kim and Mike Fortun, who edited the journal from 2005 to 2010, share their thoughts on experimentalism in anthropology during their tenure as editors, exploring the “infrastructural moment” that helped build the foundation for Cultural Anthropology’s more recent open-access transition.

Our August issue also features six original research articles. Nicholas Shapiro investigates corporeal and epistemic attunement to toxic chemicals like formaldehyde, arguing that such experiences can accumulate over time to form the basis of a “chemical sublime.” Kerry Ryan Chance analyzes the intertwining of fire and politics in urban South Africa, arguing that fire has become a crucial element in the “living politics” of making the poor—and their political mobilization qua poor—visible to the postapartheid state. Julius Bautista examines the cultivation of export-quality martyrdom among Filipino overseas foreign workers discovering affinities between transcendental doctrines of salvation and the demands of transnational labor markets. Approaching the problem of sacrifice from a different perspective, Charlene Makley shows how Chinese state violence and transnational media spectacle have helped to constitute a necropolitics of Tibetan self-immolation. June Hee Kwon examines the impact of transnational Korean Chinese migration on marriages, discussing how the affective work of waiting for love or money is becoming a increasingly common future-making project for couples. Finally, Jarrett Zigon guides us through the drug war as a series of knotted, nontotalizable assemblages, revealing how an “assemblic ethnography” can help to identify shared conditions and political potentialities among the drug war’s locations across the globe.

An Infrastructural Moment in the Human Sciences

Attuning to the Chemosphere: Domestic Formaldehyde, Bodily Reasoning, and the Chemical Sublime

“Where there is fire, there is politics”: Ungovernability and Material Life in Urban South Africa

Export-Quality Martyrs: Roman Catholicism and Transnational Labor in the Philippines

The Work of Waiting: Love and Money in Korean Chinese Transnational Migration

What is a Situation?: An Assemblic Ethnography of the Drug War