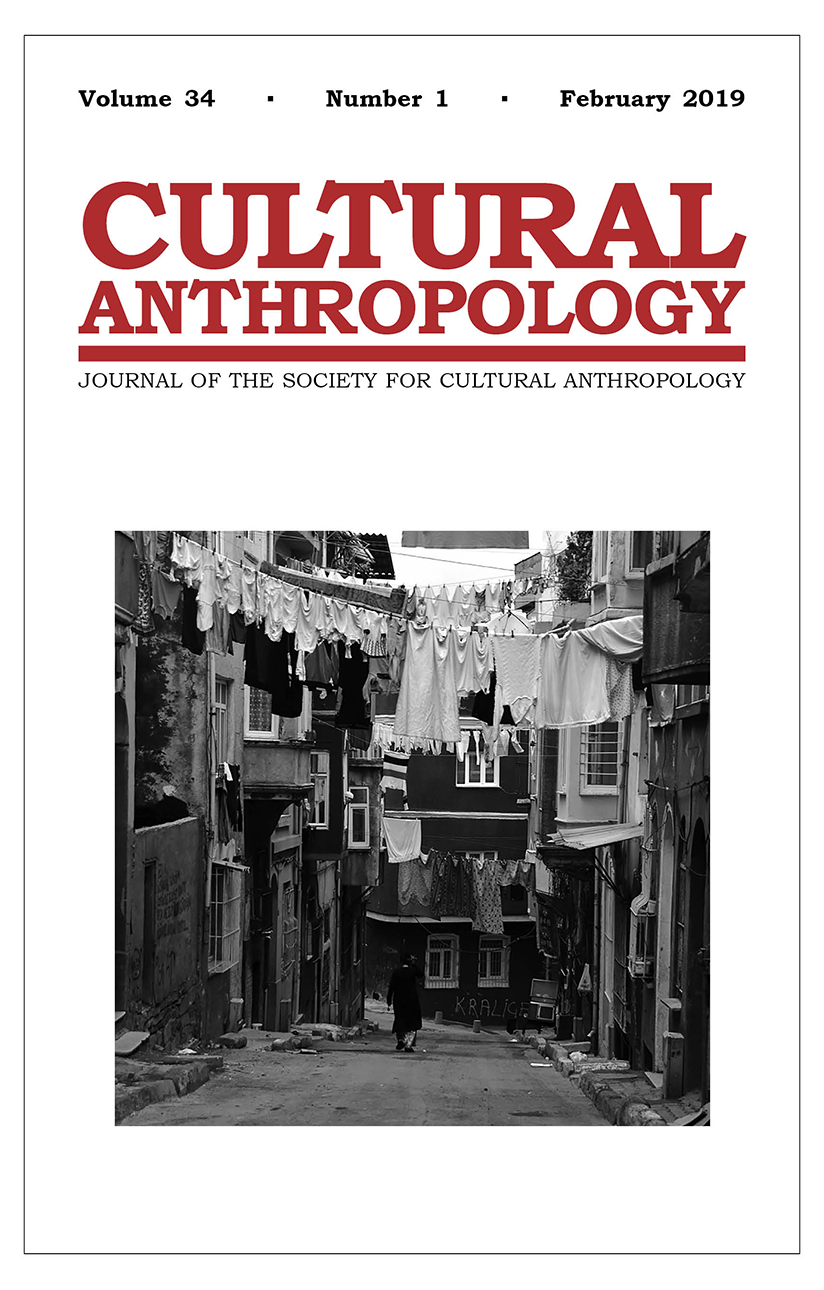 In this first issue produced under the editorship of Brad Weiss (William and Mary), Heather Paxson (MIT), and Christopher Nelson (UNC Chapel Hill), the themes of life, death, gender, and movement emerge. That all the contributions are written by women is a happy accident that underscores Cultural Anthropology’s commitment to inclusivity in scholarly opportunities. In that same vein, we are pleased with this issue to introduce to Cultural Anthropology the practice of providing translations of article abstracts in languages relevant to the content—in this issue’s case, Turkish and Arabic.

The issue opens with a timely Openings and Retrospectives collection. “Reproductive Politics in the Age of Trump and Brexit,” edited by Faye Ginsburg and Sarah Franklin, gathers feminist scholars to offer an incisive, trans-Atlantic commentary on the resonances between reproductive and immigration restrictions that are becoming standardized nightmares across the globe. Case studies by Elise Andaya, Risa Cromer, Dána-Ain Davis, Carolyn Sufrin, and Sarah Franklin demonstrate how prolife and anti-immigrant sentiments are often rooted in similar nationalist agendas, while black women’s reproductive lives in the United States continue to be contoured by what Saidiya Hartman has called the afterlife of slavery.

Four original research articles appear in the February issue. Anita Hannig reports on medically assisted end-of-life practices in Oregon, while Asli Zengin gives us a poignant account of how sovereignty and intimacy are bound up in the deaths of transgender people in Turkey. Sahar Sadjadi offers an assessment of how ideas about personhood are embedded in the body in the discourse of pediatric psychiatrists who treat transgender children and adolescents. Finally, Anne Meneley reflects on walking in Palestine (and elsewhere) as a way of registering a host of concerns about the politics of place, movement, and belonging.

Reproductive Politics in the Age of Trump and Brexit

“I’m building a wall around my uterus”: Abortion Politics and the Politics of Othering in Trump’s America

Trump, Race, and Reproduction in the Afterlife of Slavery

When the Punishment is Pregnancy: Carceral Restriction of Abortion in the United States

Author(iz)ing Death: Medical Aid-in-Dying and the Morality of Suicide

The Afterlife of Gender: Sovereignty, Intimacy and Muslim Funerals of Transgender People in Turkey

Deep in the Brain: Identity and Authenticity in Pediatric Gender Transition

Walk This Way: Fitbit and Other Kinds of Walking in Palestine