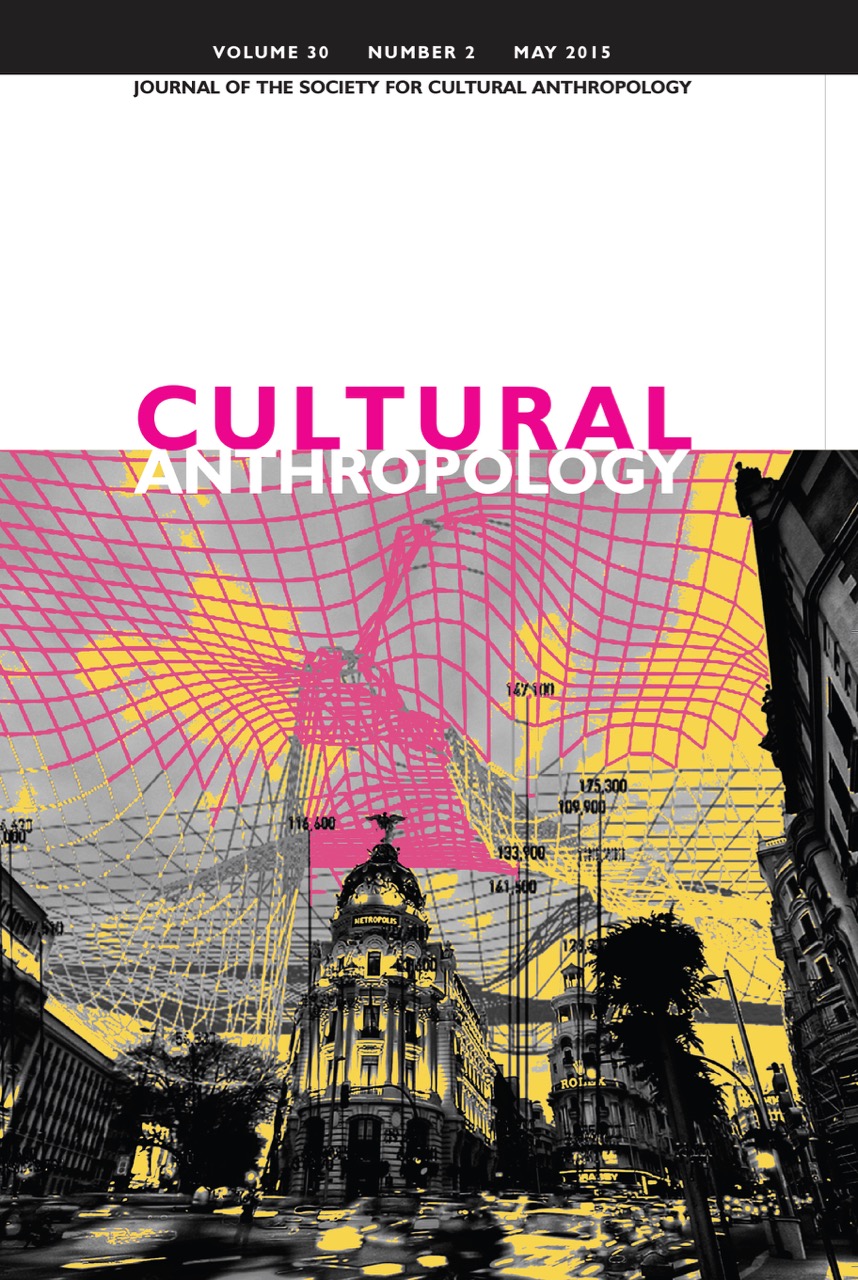 The May 2015 issue of Cultural Anthropology opens with a continuation of our yearlong series of short reflections on the first thirty years of the journal. Fred Myers writes on balancing radical and establishmentarian impulses during his editorship of the journal and his successor, Dan Segal, comments on editing with contrarian sensibilities.

This issue contains the first of our new Openings and Retrospectives feature, which seeks to stimulate conversation on anthropological thinking and writing today. Retrospectives reflect on lively conversations and thematic provocations of the past five to ten years and assess their impact on anthropological knowledge. Openings focus on imagining what anthropologists should be talking about next. Our debut Openings series of essays, “Life Above Earth,” tests the deterrestrialization of thought and explores un-earthly ethnographic domains. Debbora Battaglia, David Valentine, and Valerie Olson follow the theoretical and ethnographic potential of off-planet life, technologies, and inter-being in outer space. In an examination of air’s “suspensions,” Timothy Choy and Jerry Zee query the relationships between breathers and particulate matter as well as the contents and discontents of modern atmosphere. Vectors and zoonoses also occupy life above earth and Frédéric Keck directs us toward a biopolitics of bird-borne pathogens. And finally, in an essay by Mike Hulme, a climatologist, we read a meditation on cultivating the sky that suggests fundamental entanglements between humans, weather, and atmosphere.

Four original research articles round out the May issue. E. Summerson Carr writes on how U.S. social workers’ engagement with bedbugs challenge their professional notions of agency and revitalize American Pragmatist ideas. Vivian Choi examines how logics of disaster risk management in Sri Lanka following the 2004 Indian Ocean tsunamis have offered a political opening for new forms of state power and nation-building that she terms “disaster nationalism.” Sarah Muir analyzes middle-class Argentines’ paradoxical experience of the aftermath of the 2001–2002 currency crisis, in which the exposure of money’s fictional value also somehow strengthened the imperative of accepting its facticity. Finally, Daniel Miller engages hospice patients and carers in England on experiences of isolation and loneliness, revealing longer-standing contradictions of English sociality between acceptable public friendliness and aversion to private intrusions.

Some Reflections on Editing with Contrarian Sensibilities

Life Above Earth: An Introduction

Better Weather?: The Cultivation of the Sky

Occupation Bedbug: Or, the Urgency and Agency of Professional Pragmatism

The Currency of Failure: Money and Middle-Class Critique in Post-Crisis Buenos Aires

The Tragic Denouement of English Sociality